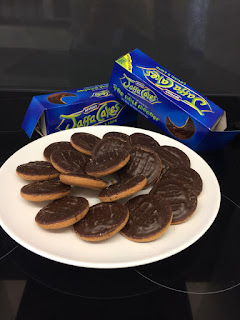 It's a lonely rock in the midst of space,
full of beauty,
full of grace,
only 12 people have visited its cratered crust,
two dozen boots have stirred it's dust.

Like all of us it has a dark side,
it affects our water and pulls our tide,
werewolves will howl when they come out at night,
seeking victims to bite in its eery light.

The romance of the lune
makes everyone swoon,
heavenly satellite,
our eternal moon.

Biscuits: Lemon and Lime Jaffa Cakes
Tasting Notes: Tangy
Score: 7 out of 10
Posted by The Biscuit Poets at 16:53 No comments:

How do you eat yours? 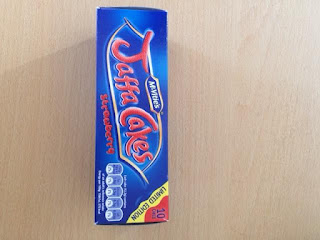 We were excited to try
the new Jaffa Cakes flavour,
sadly the the taste of strawberry
was not one to savour.

The dark chocolate mix
didn't give us our citrus fix,
whilst the choice of fruit
did not suit.

How do you eat yours?
Are you a scoffer
with an impatient jaw,
or do you make a luna eclipse
by putting half between your lips?

Do you nibble round the edge,
and save the best 'til last,
or head straight to the jelly
and eat it fast?!

Posted by The Biscuit Poets at 12:56 No comments:

Beast from the North 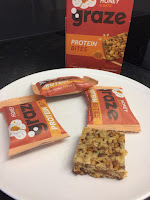 Across Europe there's a magenta warning,
extra snowfall due to global warming,
there aren't many places to go,
when you're under 10 foot of snow,
if you get our drift,
to avoid the avalanches,
jump on a ski lift.

Even as the flakes are falling,
events across the globe are snowballing,
Donald Trump is serving unhappy meals,
and failing to do any wall building deals,
maybe he could use burgers as bricks,
to keep out the poor put upon Hispanics.

There's no snow here but Theresa May's frozen out,
in Parliament she holds no clout,
everyone's giving her the cold shoulder,
if she'd have listened to us we would have told her,
Brexit's snow joke!

Posted by The Biscuit Poets at 16:57 No comments: 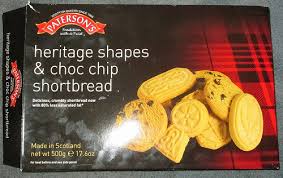 Paul once built some houses
For the gentry in Romsey
Karl created Lego dwellings
Building made him happy
If builders hadn't fixed Mandy's roof
It would still be seriously leaky
Keep the biscuits coming
And they'll work much harder you'll see.

Feed your builders well
Whilst they're working on the job
A custard cream, a jaffa cake or a chocolate hob nob!


Biscuits: Family Circle
Tasting Notes: Short and bready. Thanks Katherine x
Score:  8.5 out of 10
Posted by The Biscuit Poets at 14:42 No comments: