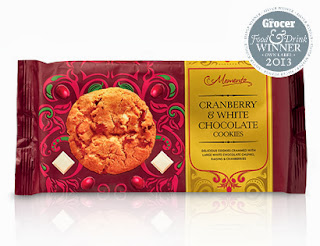 This sombre biscuit verse,
for 2014, is our first.
Memento make this crunchy,
chewy, cranberry munchy.

A white chocolate snack.
That word ‘memento’ takes us back
to the people who have just passed away
and in this poem we lament their loss today.

Alan Whicker filed his last report.
By the grim reaper’s scythe he was caught.
The last trumpet sounded for Kenny Ball.
You’ve guessed.  He made his final curtain call.

Hercule Poirot would never flatter
those who had less grey matter.
But sadly now each little grey cell
is not working quite so well.

Eusebio, who could surely shoot,
has hung up his right boot.
David Coleman knows the final score.
Phil Everly will dream no more.

Ronnie Biggs thought he’d made a great escape,
but met Inspector Nipper at the pearly gate.
Maggie Thatcher took one last snatch,
then went to meet her maker and her match.

‘That was the life that was.’  And so we lost
that grand inquisitor, David Frost.
It’s such a shame that Lou Reed died.
At least, he took that walk on the wild side.

Nelson Mandela was much debated.
On Robben Island he was incarcerated,
but walked free to unite both black and white
and clear away the stain of apartheid.

And of the rest who rest, we hope, in peace
Richard Griffiths was fun but a touch obese.
In the ring Ken Norton was no one’s fool,
although Peter O’Toole has now grown cool.

Even without Miss Kendal for a wife
Richard Briars still lived the good life,
and Louis the TV chimpanzee
made PG Tips our favourite tea.

For Michael Winner that death wish came true,
as it will as well someday surely do
both for us and indeed for you.

Ps.  Nice biscuits, with or without PG Tips.