Jack and the Biscuit Stalk

Off to the market Jack shall go
With his highland cow in tow
But Jack was too late
The market, he missed it
All he could trade Daisy for
Was Snapjack Biscuits

Home he went, feeling quite content
But his old ma she didn't relent
She threw the Snapjacks
out into the wood

‘We don’t want these,
they aren't any good’

'He tastes so scrumptious in my tum'
thought Jack as he gulped him down in one.
'Who wants Snapjacks from Maryland anyway?
I’d rather have their choc chip cookies any day!'

The morale of the story? Here's the facts
These awful Snapjacks should be axed
Maryland your choc chip cookies are top notch
Focus on them, not this honeycomb hotch-potch!


Biscuit: Maryland Honeycomb Snapjacks
Taste test: 4 out of 10
Cost:  £1 from Asda in Totton
Posted by The Biscuit Poets at 14:09 No comments: 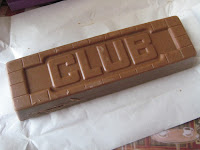 Today is the day of the budget
When the Chancellor gets busy with his boxes
When Osbourne sets out again to fudge it
And takes our money for his taxes – we begrudge it.

George Osbourne likes his Clubs.
One to munch on,
Another for luncheon,
A member of all the 'too much' clubs
The leader of the 'out of touch' club.

He will only cater for the elite Tory Boys club,
the rest of us peasants he will certainly snub.
Soon, like Cyprus there'll be no cash in the machines,
poor old Georgie Boy will have to come clean.

He doesn't live in our world
Where biscuit crumbs matter,
He's the king of the cats
And just keeps getting fatter.

The Welsh take the Biscuit

It may sound weird,
It may sound funny,
But the mixture of kiwi fruit
and manuka honey
tastes really rather scrum-my.

Out of the 'old world of Europe'
came the recipe,
from there exported
to the New Zealand Maori.

Just like the Maori people
they are made of sterner stuff,
dunk them in your tea and they'll
still stay tough.

Thanks Heavens New Zealand
weren't in the 6 Nations Cup.
England wouldn't have stood up
to the All Blacks ruck.

In the end it didn't matter
it wasn't the flippin' Haka,
we were beaten 30 points to 3
by the men from the welsh valley. 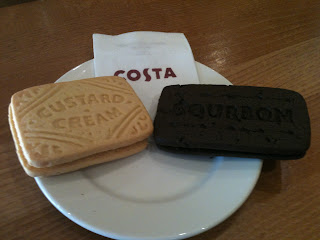 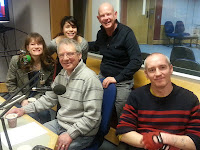 
We're sitting here in Costa
in a post Radio Solent haze,
our 5 minutes of fame has left us
all a-daze!

First the Echo,
now Julian Clegg,
must make sure it doesn't go
to our heads.

We've reverted to biscuits
to try and relax.
and two massive snacks have stopped us
in our tracks.

Sat on Southampton Road
or is it Sesame Street?
The Cookie Monster would feel at home
with these 'supersize me' treats.

Biscuit: Costa's Monster size Bourbon and Custard Cream
Taste test: 9.9 out of 10
Cost: £1.75 each from Costa Coffee in Southampton

Extra, Extra, Read all about us! 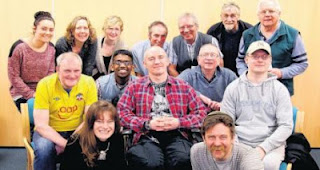 Excuse the overexcitement but we are all a dither over our Biscuit Poetry feature in the local rag today.
Have a read....

Who would have thought that biscuits and tea could ignite such poetry!
Posted by The Biscuit Poets at 13:56 2 comments:

Recipe for a Rocky Road 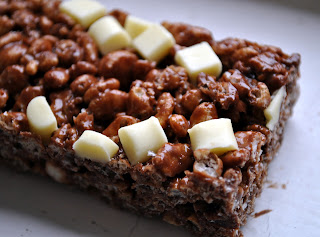 Fill the gaps with fine stone just like that
Next roll it and roll it 'til it's nice and flat
Pour on silken sand and level it out
roll again to make it strong, sturdy and stout

Biscuit: Kellogg's Rice Krispies Rocky Road Squares
Taste test: 6.8 out of 10
Cost: £1.99 from Tesco in Brockenhurst
Posted by The Biscuit Poets at 14:28 3 comments: